Automating the Build of a FlexVPN Network

In this post I will also introduce two concepts that are frequently used in software development world - DRY and “Convention over Configuration”. This post is a precursor to the upcoming FlexVPN configuration post on Packetpushers.

FlexVPN topology will consist of two FlexVPN “clouds”. Each cloud has a Hub router and multiple Spokes. Each Spoke is connected to each of the two Hubs thereby participating in both FlexVPN clouds. The two Hubs are interconnected by a direct site-to-site FlexVPN tunnel. To provide additional redundancy one Hub (HUB-1) and one Spoke (SPOKE-1) will have dual WAN links. 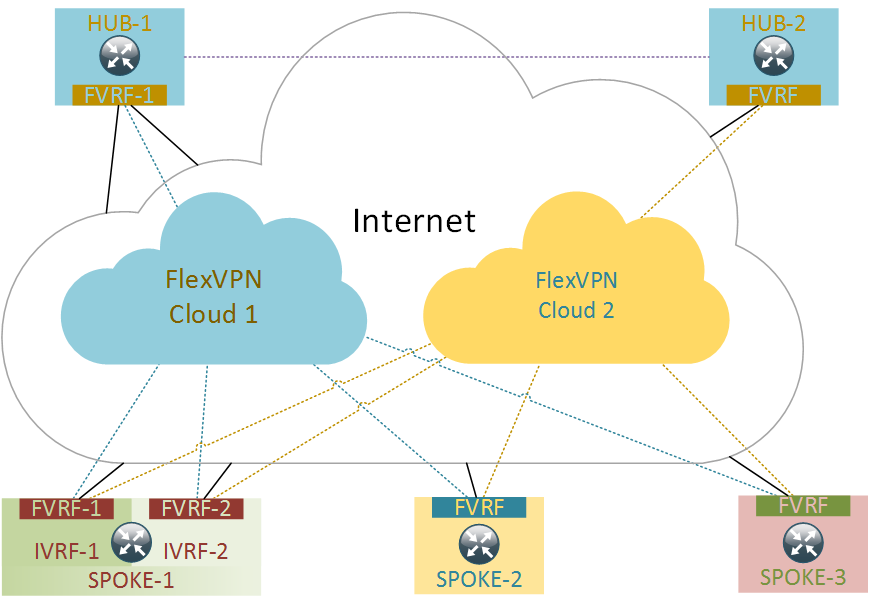 All FlexVPN devices will be using PKI-based authentication. However, in this post I will not cover the setup of PKI infrastructure and simply assume that all Hubs and Spokes are already enrolled with the appropriate CA. Following are the assumptions about the specifics of PKI setup on each router:

As an example, SPOKE-3 will have the following trustpoint configured for FlexVPN cloud #1:

This is where it’d make sense to introduce the concept of Convention over Configuration. The fact that we’ve assumed that all trustpoints will have the prefix of “PKI-CLOUD-” (convention) makes configuration templates a lot easier. Without it we could have allowed ANY naming of PKI trustpoint but then it should have been defined as a separate variable for every Spoke. Effectively we’re sacrificing some level flexibility in favour of brevity (and simplicity). This principle has been popularised by Ruby on Rails web framework and is widely used in other modern web frameworks.

Before we start working with Ansible, we need to populate host inventory file. A parent “FLEXVPN” group will include two children groups - “HUBS” and “SPOKES”. The latter will be subdivided into three groups - “GREEN”, “BLUE” or “RED”. Each spoke will be assigned to a group base on its X.509 OU value. Additionally, in order to keep configuration templates simpler, we’ll treat multi-vrf SPOKE-1 as two different routers - SPOKE1_1 and SPOKE1_2:

Another assumption is that all routers will have their Front-door VRF configured. Normally this would imply configuring an IP address on Internet-facing interface and a vrf-specific default route. In case of HUB-1, where there are two physical links in a single VRF, it is assumed that appropriate SLA-tied static routes are configured to enable dynamic failover between the two links. Here’s the example of how it’s done on HUB-1:

Environment variables and the DRY principle

One of the most obvious things to turn into a variable is the FVRF name and interface. We’ll put it into an Ansible’s global variable file ./group_vars/all. The same file will have a default BGP AS number for iBGP routing and a table mapping different OU values to their corresponding bandwidth in Kbps.

Each of these variables can be overridden by a more specific host variable located in ./host_vars/ directory like it is the case with SPOKE1. All host-specific variables, like domain names, FlexVPN subnets, public addresses for Hub devices are also being stored in the same directory. Here’s an example of how HUB-1 overrides the default FVRF name and defines a few variables of its own:

Here it makes sense to talk about the DRY principle. All Spokes in their configuration files will use information like Hub’s NBMA address and domain name. So, in theory, we could have created a host variable file for each Spoke and stored that information there. However, in that case we would have multiple duplicate variables all storing the same value. This, obviously, creates a lot of problems when it comes to updating those variables. Instead of updating a value in a single place we now have to go and update every single Spoke’s host variables file. That’s why it’s important to NOT have ANY duplicates of ANY information in ANY part of your code, even if it comes at a price of an increased code complexity. This is widely accepted as best practice and used in almost every programming language and CS discipline.

I will omit the actual configuration templates for the sake of brevity. Those who are interested can check out my FlexVPN Github repository. Here’s how you can generate a full-blown config for FlexVPN network:

All generated configuration files will be stored in ./files/ directory.

Thanks to DRY and Convention over Configuration principles it’s possible to devise a configuration template that will be the same for all Spokes. The actual configuration will consist of multiple components like IKEv2, dynamic VTI, AAA and BGP configuration. I’ll try to explain how they all tie together in my upcoming post on Packetpushers.