Depending on the number of deployed components, OpenStack physical network requirements could be different. In our case we’re not going to deploy any storage solution and simply use the ephemeral storage, i.e. hard disk that’s a part of a virtual machine. However, even in minimal installations, there are a number of networks that should be considered individually due to different connectivity requirements:

Based on my experience a standard server would have at least 3 physical interfaces - one for OOB management and a pair of interfaces for application traffic. The two application interfaces will normally be combined in a single LAG and connected to a pair of MLAG-capable TOR switches. Multi-chassis LAG or MLAG is a pretty old and well-understood technology so I’m not going to try and simulate it in the lab. Instead I’ll simply assume that a server will be connected to a TOR switch via a single physical link. That link will be setup as a dot1q trunk to allow for multiple subnets to share it.

All the above requirements and assumptions result in the following topology that we need to build inside UNetLab: 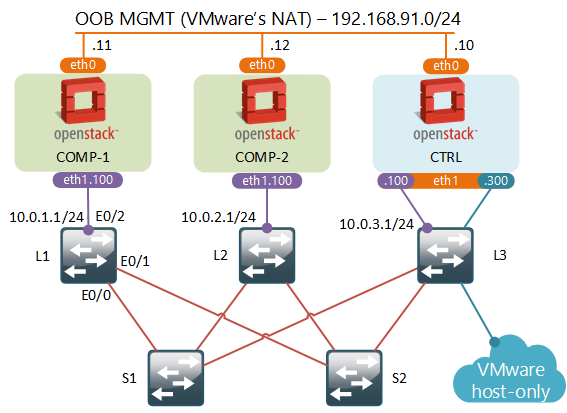 For servers I’ll be using OpenStack node type that I’ve described in my previous post. The two compute nodes do not need as much RAM as the control node, so I’ll reduce it to just 2GB.

For switches I’ll be using a Cisco’s L2 IOU image for now, mainly due to the low resource requirements. In the future I’ll try and swap it for something else. As you can see from the sample config below, fabric configuration is very basic and can be easily replaced by any other solution:

Refer to my previous blogpost for instructions on how to install OpenStack and follow the first 5 steps from “Installing CentOS and OpenStack” section. Before doing the final step, we need to configure our VMs’ new interfaces:

Now we’re ready to kick off OpenStack installation. This can be done with a single command that needs to be executed on the Control node. Note that eth1.100 interface is spelled as eth1_100 in the last line.

Creating a virtual network for a pair of VMs

Once again, follow all steps from “Configuring OpenStack networking” section of my previous blogpost. Only this time when setting up a public subnet, update the subnet details to match our current environment:

Nova-scheduler and setting up host aggregates

OpenStack’s Nova project is responsible for managing virtual machines. Nova controller views all available compute nodes as a single pool of resources. When a new VM is to be instantiated, a special process called nova-scheduler examines all available compute nodes and selects the “best” one based on a special algorithm, which normally takes into account amount of RAM, CPU and other host capabilities.

To make our host selection a little bit more deterministic, we can define a group of compute servers via host aggregates, which will be used by nova-scheduler in its selection algorithm. Normally it could include all servers in a single rack or a row of racks. In our case we’ll setup two host aggregates each with a single compute host. This way we’ll be able to select exactly which compute host to use when instantiating a new virtual machine.

To setup it up, from Horizon’s dashboard navigate to Admin -> System and create two host aggregates comp-1 and comp-2, each including a single compute host.

Using a process described in “Spinning up a VM” section of my previous blogpost, create a couple of virtual machines assigning them to different host aggregates created earlier.

To access these virtual machines we need to give them a floating ip address from the External subnet range. To do that navigate to Project -> Compute -> Instances and select Associate Floating IP from the Actions drop-down menu.

At this stage you should be able to SSH into the floating IP addresses assigned to the two new VMs using the default credentials. Feel free to poke around and explore Horizon’s interface a bit more. For example, try setting up an SSH key pair and re-build our two VMs to allow passwordless SSH access.

What to expect next

In the next post we’ll explore some of the basic concepts of OpenStack’s SDN. We’ll peak inside the internal implementation of virtual networks and see what are some of their limitations and drawbacks.