The network consists of 4 nodes interconnected via point-to-point links and running EIGRP as a routing protocol. 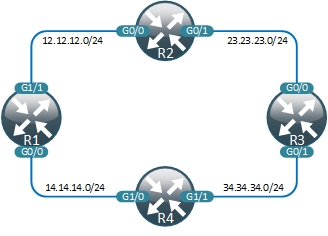 Traffic flow test file contains an ordered set of test scenarios that will be performed automatically. The following is an example that illustrates main capabilities of our test tools:

Each scenario starts with a failure definition. It could be either None, which represents normal network conditions, or it could contain a list of interfaces that need to be failed. Following the failure definition are the actual tests. On each line we define source, destination and the path we expect the traffic to take. Path definition (everything following the ‘via’ keyword) contains an ordered set of nodes and can use simple boolean operators like or or not.

Ping flow definition file is a lot shorter and simply contains a list of source/destination pairs to run a ping test between. All ping tests will execute concurrently and issue only 2 pings, therefore we’ll only be able to detect connectivity loss if it lasts for more than 4 seconds.

In the previous post we’ve automatically built a VM with Jenkins and UNetLab pre-installed. Before we can start using Jenkins we need to install a Github plugin, which can be done very easily from Jenkins GUI. Power up your vm-network-ci and open Jenkins home page at http://VM_IP:8080. From there navigate to Manage Jenkins -> Manage Plugins -> Available, search for and install the GitHub plugin.

Inside Jenkins, a job represents a set of tasks that need to be automated for a particular project. Each job first waits for a trigger, which can be either a manual or an automatic event. When triggered, it connects to Github repository, downloads all the code to a local machine and executes a set of build steps defined in this job. A very simple workflow would looks like this:

Now imagine that a new requirements has come in to make sure that traffic from R1 to R3’s Gig0/1 does not traverse R4 and goes via R2 instead, only falling back to R4 when R1-R2 link is down. In the following video I’ll show how to use network-ci tools locally to implement and test this traffic engineering requirement.

In the next post I’ll show how to apply the same workflow to automate the build, test and ugprade of a large 14-node topology.