This is going to be quite a lengthy blogpost so I’ll try to explain its structure first. I’ll start with a high level overview of components used to build virtual networks by examining 3 types of traffic:

Following that I’ll give a brief overview of how to interpret the configuration and dynamic state of OpenvSwitch to manually trace the path of a packet. This will be required for the next section where I’ll go over the same 3 types of traffic but this time corroborating every step with the actual outputs collected from the virtual switches. For the sake of brevity I’ll abridge a lot of the output to only contain the relevant information.

Neutron server, residing in a control node, is responsible for orchestrating and provisioning of all virtual networks within an OpenStack environment. Its goal is to enable end-to-end reachability among the VMs and between the VMs and external subnets. To do that, Neutron uses concepts that should be very familiar to every network engineer like subnet, router, firewall, DHCP and NAT. In the previous post we’ve seen how to create a virtual router and attach it to public and private networks. We’ve also attached both of our VMs to a newly created private network and verified connectivity by logging into those virtual machines. Now let’s see how exactly these VMs communicate with each other and the outside world. 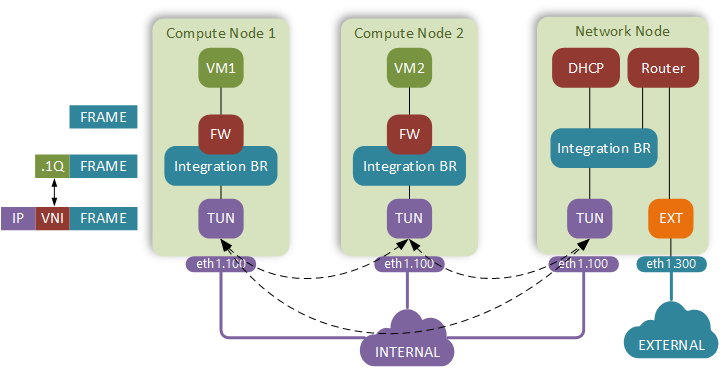 Unicast frame between VM1 and VM2

BUM frame from VM1 for MAC address of VM2

Before we dive deeper into the details of the packet flows inside OVS let me give a brief overview of how it works. There are two main protocols to configure OVS:

Control node instructs all local OVS agents about how to configure virtual networks. Each local OVS agent then uses these two protocols to configure OVS and install all the required forwarding entries. Each entry contains a set of matching fields (e.g. incoming port, MAC/IP addresses) and an action field which determines what to do with the packet. These forwarding entries are implemented as tables. This is how a packet traverses these tables:

Let’s start by recapping what we know about our private virtual network. All these values can be obtained from Horizon GUI by examining the private network configuration under Project -> Network -> Networks -> private_network:

The first 11 characters of port id will be used inside an integration bridge to build the port names, e.g.:

In its forwarding entries OVS uses internal port numbers a lot, therefore it would make sense to collect all port number information before we start. This is how it can be done:

I’ve put together a diagram showing all the relevant integration bridge (br-int) and tunnel bridge (br-tun) ports on all 3 hosts. 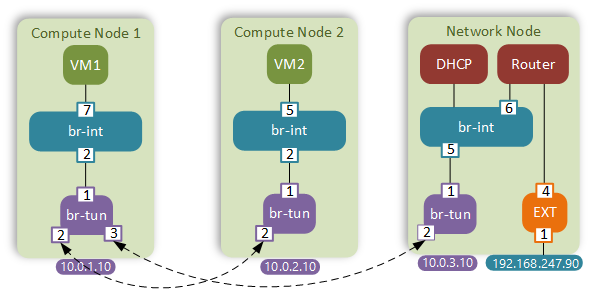 Unicast frame between VM1 and VM2

1 - Frame enters the br-int on port 7. Default iptables rules allow all outbound traffic from a VM.

2 - Inside the br-int our frame is matched by the “catch-all” rule which triggers the flood-and-learn behaviour:

3 - Since it’s a unicast frame the MAC address table is already populated by ARP:

Target IP address is behind port 2 which is where the frame gets forwarded next.

The final match is done on a VLAN tag and destination MAC address. Resulting action is a combination of three consecutive steps:

This last match entry is quite interesting in a way that it contains the destination MAC address of VM2, which means this entry was created after the ARP process. In fact, as we’ll see in the next step, this entry is populated by a learn action triggered by the ARP response coming from VM2.

5 - A VXLAN packet arrives at compute host 2 and enters the tunnel bridge through port 2. It’s matched on the incoming port and resubmitted to a table where it is assigned with an internal VLAN ID 3 based on the matched tunnel id 0x54.

The last match does two things:

1 - The first 5 steps will be similar to the previous section. The only exception will be that the tunnel bridge of compute host 1 will send the VXLAN packet out port 3 towards the network node.

2 - The integration bridge of the network node consults the MAC address table to find the location of the virtual router (89:47) and forwards the packet out port 6.

By default all packets will get translated to the external address of the router. For each assigned floating IP address there will be a pair of source/destination NAT entries created in the same table.

5 - The router consults its local ARP table to find the MAC address of the next hop:

6 - External bridge receives the frame from the virtual router on port 4, consults its own MAC address table built by ARP and forwards the packet to the final destination.

BUM frame from VM1 for MAC address of VM2

1 - The integration bridge of the sending host will check the source IP of the ARP packet to make sure it hasn’t been spoofed before flooding the packet within the local broadcast domain (VLAN 5).

The final table swaps the dot1q and VXLAN identifiers and does the source replication by forwarding the packet out ports 2 and 3. 3 - The following steps are similar to the unicast frame propagation with the exception that the local MAC table of the integration bridges will flood the packet to all interfaces in the same broadcast domain. That means that duplicate ARP requests will reach both the private interface of the virtual router and VM2. The latter, recognising its own IP, will send a unicast ARP response whose source IP will be verified by the ARP spoofing rule of the integration bridge. As the result of that process, both integration bridges on compute host 1 and 2 will populate their local MAC tables with addresses of VM1 and VM2.

However at this point it should also be clear that there a number of limitations that can impact the overall network scalability and performance:

Things to explore next

In the following posts I’ll continue poking around Neutron and explore a number of features designed to address some of the limitations described above:

While writing this post I’ve compiled a list of commands most useful to query the state of OpenvSwitch. So now, inspired by a similar IOS to JUNOS (I2J) command conversion tables, I’ve put together my own Cisco to OVS conversion table, just for fun.

In this post I have glossed over some details like iptables and DHCP for the sake of brevity and readability. However this post wouldn’t be complete if I didn’t include references to other resources that contain a more complete, even if at times outdated, overview of OpenStack networking. This is also a way to pay tribute to blogs where I’ve learned most of what I was writing about here: