Building virtualised network topologies has been one of the best ways to learn new technologies and to test new designs before implementing them on a production network. There are plenty of tools that can help build arbitrary network topologies, some with an interactive GUI (e.g. GNS3 or EVE-NG/Unetlab) and some “headless”, with text-based configuration files (e.g. vrnetlab or topology-converter). All of these tools work by spinning up multiple instances of virtual devices and interconnecting them according to a user-defined topology.

Most of these tools were primarily designed to work on a single host. This may work well for a relatively small topology but may become a problem as the number of virtual devices grows. Let’s take Juniper vMX as an example. From the official hardware requirements page, the smallest vMX instance will require:

This does not include the resources consumed by the underlying hypervisor, which can easily eat up another vCPU + 2GB of RAM. It’s easy to imagine how quickly we can hit the upper limit of devices in a single topology if we can only use a single hypervisor host. Admittedly, vMX is one of the most resource-hungry virtual routers and using other vendor’s virtual devices may increase that upper limit. However, if the requirement is to simulate topologies with 100+ devices, no single server will be able to cope with the required load and a potential resource contention may lead to instabilities and various software bugs manifesting themselves in places we don’t expect.

Ideally, in large-scale simulations, we’d want to spread the devices across multiple hosts and interconnect them so that, from the device perspective, it’d look like they are still running on the same host. To take it a step further, we’d want the virtual links to be simple point-to-point L2 segments, without any bridges in between, so that we don’t have to deal with issues when virtual bridges consume or block some of the “unexpected” traffic, e.g. LACP/STP on Linux bridges.

It’s possible to build multi-host VM topologies on top of a private cloud like solution like OpenStack or VMware. The operational overhead involved would be minimal as all the scheduling and network plumbing should be taken care of by virtual infrastructure manager. However this approach has several disadvantages:

In contrast, containers provide an easy way to mount volumes inside a container’s filesystem, have plenty of options for resource scheduling and orchestrators and are substantially more lightweight and customizable. As a bonus, we get a unified way to package, distribute and manage lifecycle of our containers, independent from the underlying OS.

Note: AFAIK only Arista and Juniper build docker container images for their devices (cEOS and cSRX). However it is possible to run any VM-based network device inside a docker container, with many examples and makefiles available on virtnetlab.

On the other hand, the approach chosen by K8s provides an easier way to modify the default behaviour of a network plugin or to create a completely new implementation. However, K8s itself imposes several requirements on CNI plugins:

The above also implies that communication between the containers happens at L3, which means that no container should make any assumptions about the underlying L2 transport, i.e. not use any L2 protocols(apart from ARP). Another corollary of the above requirements is that every container only has a single IP and hence a single interface, which, together with the previous L2 limitation, makes network simulations in K8s nearly impossible.

There are multiple solutions that solve the problem of a single network interface per container/pod - CNI-Genie, Knitter and Multus CNI. All of them were primarily designed for containerised VNF use cases, with the assumption that connectivity would still be provided by one of the existing plugins, which still leaves us with a number of issues:

Perhaps it would have been possible to hack one of the plugins to do what I wanted but I felt like it’d be easier to build a specialised CNI plugin to do just what I want and nothing more. As I’ve mentioned previously, developing a simple CNI plugin is not that difficult, especially if you have a clearly defined use case, which is why I’ve built meshnet - a CNI plugin to build arbitrary network topologies out of point-to-point links.

At a very high level, every CNI plugin is just a binary and a configuration file installed on K8s worker nodes. When a pod is scheduled to run on a particular node, a local node agent (kubelet) calls a CNI binary and passes all the necessary information to it. That CNI binary connects and configures network interfaces and returns the result back to kubelet. The information is passed to CNI binary in two ways - through environment variables and CNI configuration file. This is how a CNI ADD call may look like:

There are plenty of other resources that cover CNI plugin development in much greater detail, I would recommend reading at least these four:

The goal of meshnet plugin is to interconnect pods via direct point-to-point links according to some user-defined topology. To do that, the plugin uses two types of links:

One thing to note is that point-to-point links are connected directly between pods, without any software bridges in between, which makes the design a lot simpler and provides a cleaner abstraction of a physical connection between network devices.

Just like Multus, meshnet has the concept of master/default plugin, which sets up the first interface of the pod. This interface is setup by one of the existing plugins (e.g. bridge or flannel) and is used for pod’s external connectivity. The rest of the interfaces are setup according to a topology information stored in etcd. 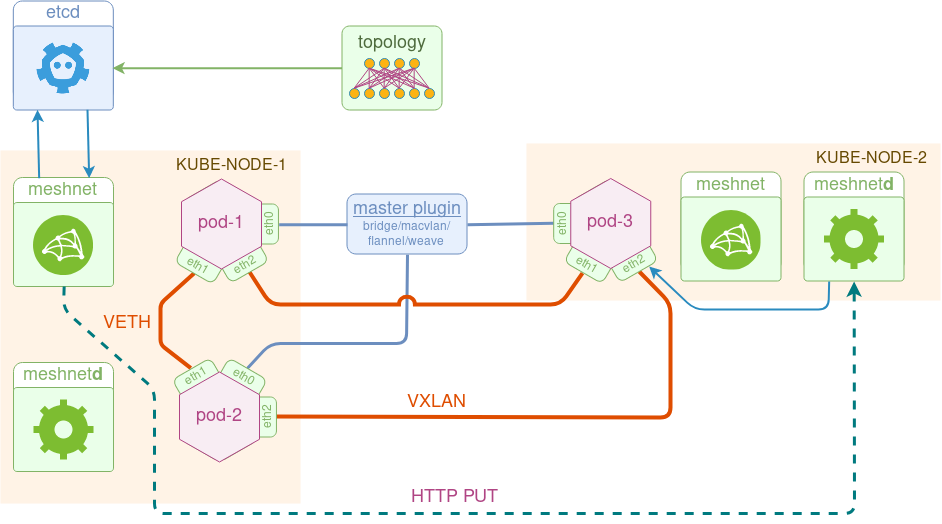 Although the original idea of a CNI plugin was to have a single stateless binary, most of the time there’s a need to maintain some runtime state (e.g. ip routes, ip allocations etc.), which is why a lot of CNI plugins have daemons. In our case, daemon’s role is to ensure Vxlan link configurations are correct across different hosts. Using the above diagram as an example, if pod-2 comes up after pod-3, there must be a way of signalling the (node-1) VTEP IP to the remote node (node-2) and making sure that the Vxlan link on node-2 is moved into pod-3’s namespace. This is accomplished by meshnet binary issuing an HTTP PUT request to the remote node’s daemon with all the required Vxlan link attributes attached as a payload.

One of the assumptions I made in the design is that topology information is uploaded into the etcd cluster before we spin up the first pod. I’ll focus on how exactly this can be done in the next post but for now, let’s assume that it’s is already there. This information needs to be structured in a very specific way and must cover every interface of every pod. The presence of this information in etcd tells meshnet binary what p2p interfaces (if any) need to be setup for the pod. Below is a sample definition of a link from pod2 to pod3:

Meshnet binary is written in go and, like many other CNI plugins, contains a common skeleton code which parses input arguments and variables. Most of the plugin logic goes into cmdAdd and cmdDel functions that get called automatically when CNI binary is invoked by kubelet.

When master plugin is finished, we upload current pod’s runtime metadata to etcd. This is required so that peer pods can find and connect to our pod when needed. Specifically, they would need VTEP IP for remote vxlan links and namespace file descriptor for local veth links.

At this stage, we’re ready to setup pod’s links. Instead of manipulating netlink directly, I’m using koko - a high-level library that creates veth and vxlan links for containers. The simplified logic of what happens at this stage is summarised in the following code snippet:

We start by downloading metadata for each pod that we have a link to and check if it has already come up. The value of peerPod.SrcIP determines whether we’re on the same node and need to setup a veth link or on different nodes and we need to setup a vxlan tunnel between them. The latter is done in two steps - first, a local Vxlan link is setup and moved to a pod’s namespace, followed by an HTTP PUT sent to the remote node’s meshnet daemon to setup a similar link on the other end.

The easiest way to walk through this demo is by running it inside a docker:dind container, with a few additional packages installed on top of it: 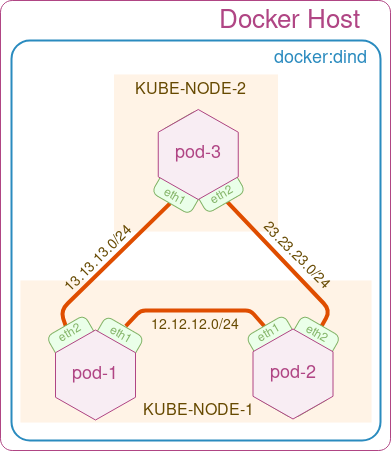 In this demo, we’ll build a simple triangle 3-node topology as shown in the figure above. We start by cloning the meshnet Github repository

The last command may take a few minutes to download all the required images. Once the K8s cluster is ready, we can start by deploying the private etcd cluster

The ./tests directory already contains link databases for our 3-node test topology, ready to be uploaded to etcd:

The only thing that’s required now is the master plugin configuration update. Since different K8s clusters can use a different plugins, the configuration file installed by the daemonset contains a dummy value which needs to be overwritten. In our case, the kubeadm-dind-cluster we’ve installed should use a default bridge plugin which can be merged into our meshnet configuration file like this:

Now meshnet CNI plugin is installed and configured and everything’s ready for us to create our test topology.

The following command will verify that the topology has been created and confirm that pods are scheduled to the correct nodes:

Finally, we can do a simple ping test to verify that we have connectivity between all 3 pods:

The process demonstrated above is quite rigid and requires a lot of manual effort to create a required topology inside a K8s cluster. In the next post, we’ll have a look at k8s-topo - a simple tool that orchestrates most of the above steps - generates topology data and creates pods based on a simple YAML-based topology definition file.