Before we start, let’s recap the difference between the two major Neutron network types:

External network is used by VMs to communicate with the outside world (north-south). Since default gateway is located outside of OpenStack environment this, by definition, is a provider network. Normally, tenant networks will use the non-routable address space and will rely on a Neutron virtual router to perform some form of NAT translation. As we’ve seen in the earlier post, Neutron virtual router is directly connected to the external bridge which allows it to “borrow” ip address from the external provider network to use for two types of NAT operations:

In default deployments all NATing functionality is performed by a network node, so external provider network only needs to be L2 adjacent with a limited number of physical hosts. In deployments where DVR is used, the virtual router and NAT functionality gets distributed among all compute hosts which means that they, too, now need to be layer-2 adjacent to the external network.

The direct adjacency requirement presents a big problem for deployments where layer-3 routed underlay is used for the tenant networks. There is a limited number of ways to satisfy this requirements, for example:

As I’ve said in my earlier post, I’ve built the leaf-spine fabric out of Cisco IOU virtual switches, however the plan was to start introducing other vendors later in the series. So this time for the border leaf role I’ve chosen Arista vEOS switch, however, technically, it could have been any other vendor capable of doing VXLAN-VLAN bridging (e.g. any hardware switch with Trident 2 or similar ASIC). 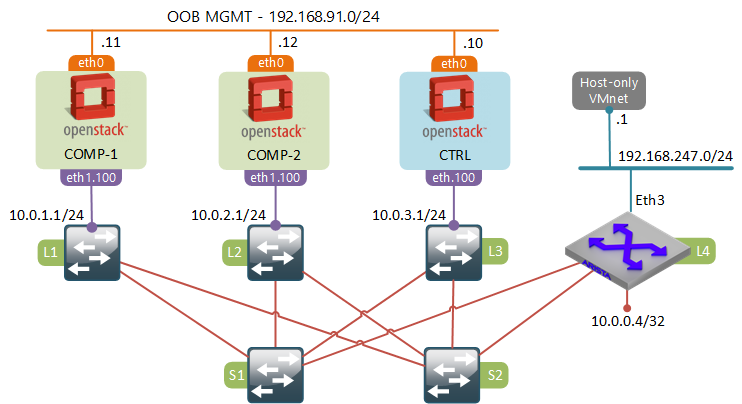 Configuration of Arista switches is very similar to Cisco IOS. In fact, I was able to complete all interface and OSPF routing configuration only with the help of CLI context help. The only bit that was new to me and that I had to lookup in the official guide was the VXLAN configuration. These similarities makes the transition from Cisco to Arista very easy and I can understand (but not approve!) why Cisco would file a lawsuit against Arista for copying its “industry-standard CLI”.

Interface VXLAN1 sets up VXLAN-VLAN bridging between VNI 1000 and VLAN 100. VLAN 100 is used to connect to VMware Workstation’s host-only interface, the one that was previously connected directly to the L3 leaf switch. VXLAN interface does the multicast source replication by flooding unknown packets over the layer 3 fabric to the network node (10.0.3.10).

Since we don’t yet have the distributed routing feature enabled, the only OpenStack component that requires any changes is the network node. First, let’s remove the physical interface from the external bridge, since it will no longer be used to connect to the external provider network.

Next let’s add the VXLAN interface towards the Loopback IP address of the Arista border leaf switch. The key option sets the VNI which must be equal to the VNI defined on the border leaf.

Without any physical interfaces attached to the external bridge, the OVS will use the Linux network stack to find the outgoing interface. When a packet hits the vxlan1 interface of the br-ex, it will get encapsulated in a VXLAN header and passed on to the OS network stack where it will follow the pre-configured static route forwarding all 10/8 traffic towards the leaf-spine fabric. Check out this article if you want to learn more about different types of interfaces and traffic forwarding behaviours in OpenvSwitch.

In order to make changes persistent and prevent the static interface configuration from interfering with OVS, remove all OVS-related configuration and shutdown interface eth1.300.

Change in the packet flow

None of the packet flows have changed as the result of this modification. All VMs will still use NAT to break out of the private environment, the NAT’d packets will reach the external bridge br-ex as described in my earlier post. However this time br-ex will forward the packets out the vxlan1 port which will deliver them to the Arista switch over the same L3 fabric used for east-west communication.

If we did a capture on the fabric-facing interface eth1 of the control node while running a ping from one of the VMs to the external IP address, we would see a VXLAN-encapsulated packet destined for the Loopback IP of L4 leaf switch.

In the next post we’ll examine the L2 gateway feature that allows tenant networks to communicate with physical servers through yet another VXLAN-VLAN hardware gateway.