Recently I’ve been pondering the idea of cloud-like method of consumption of traditional (physical) networks. My main premise for this was that users of a network don’t have to wait hours or days for their services to be provisioned when all that’s required is a simple change of an access port. Let me reinforce it by an example. In a typical data center network, the configuration of the core (fabric) is fairly static, while the config at the edge can change constantly as servers get added, moved or reconfigured. Things get even worse when using infrastructure-as-code with CI/CD pipelines to generate and test the configuration since it’s hard to expose only a subset of it all to the end users and it certainly wouldn’t make sense to trigger a pipeline every time a vlan is changed on an edge port.

This is where Network-as-a-Service (NaaS) platform fits in. The idea is that it would expose the required subset of configuration to the end user and will take care of applying it to the devices in a fast and safe way. In this series of blogposts I will describe and demonstrate a prototype of such a platform, implemented on top of Kubernetes, using Napalm as southbound API towards the devices.

One thing I’ve decided NOT to do is build NaaS around a single automation framework. The tendency to use a single framework to solve all sorts of automation problems can lead to a lot of unnecessary hacking and additional complexity. When you’re finding yourself constantly writing custom libraries to perform some logic that can not be done natively within the framework, perhaps it’s time to step back and reassess your tools. The benefit of having a single tool, may not be worth the time and effort spent customising it. A much better approach is to split the functionality into multiple services and standardise what information is supposed to be passed between them. Exactly what microservices architecture is all about. You can still use frameworks within each service if it makes sense, but these can be easily swapped when a newer and better alternative comes along without causing a platform-wide impact.

One problem that needs to be solved, however, is where to run all these microservices. The choice of Kubernetes here may seem like a bit of a stretch to some since it can get quite complicated to troubleshoot and manage. However, in return, I get a number of constructs (e.g. authentication, deployments, ingress) that are an integral part of any platform “for free”. After all, as Kelsey Hightower said:

Kubernetes is a platform for building platforms. It's a better place to start; not the endgame.

So here is a list of reasons why I’ve decided to build NaaS on top of Kubernetes:

Not to mention all of the more standard capabilities like container orchestration, lifecycle management and auto-healing.

The foundation of NaaS

Before I get to the end-user API part, I need to make sure I have the mechanism to modify the configuration of my network devices. Below is the high-level diagram that depicts how this can be implemented using two services: 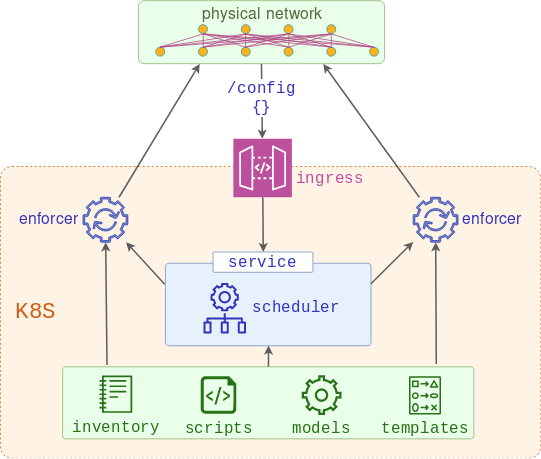 Scheduler, just like all the other services in NaaS, is written in Python. The web server component has a single webhook that handles incoming HTTP POST requests with JSON payload containing the list of devices.

The next thing it does is read the device inventory mounted as a local volume from the Kubernetes secret store and decide how many devices to schedule on a single runner. This gives the flexibility to change the number of devices processed by a single runner (scale-up vs scale-out).

Finally, for each slice of the inventory, scheduler creates a Kubernetes job based on a pre-defined template, with base64-encoded inventory slice as an environment variable.

In order for the scheduler to function, it needs to have several supporting Kubernetes resources:

Most of these resources (with the exception of configmaps) are defined in a single manifest file.

The current implementation of the enforcer uses Nornir together with Jinja and Napalm plugins. The choice of the framework here is arbitrary and Nornir can easily be replaced with Ansible or any other framework or script. The only coupling between the enforcer and the scheduler is the format of the inventory file, which can be changed quite easily if necessary.

The enforcer runner is built out of two containers. The first one to run is an init container that decodes the base64-encoded inventory and saves it into a file that is later used by the main container.

The second container is the one that runs the device configuration logic. Firstly, it retrieves the list of all device data models and templates and passes them to the push_config task.

Inside that task, a list of sorted data models get combined with jinja templates to build the full device configuration:

Finally, we push the resulting config to all the devices in the local inventory:

Before we begin the demonstration, I wanted to mention a few notes about my code and test environments:

The code for this post can be downloaded here.

Any two EOS devices can be used as a testbed, as long as they can be accessed over eAPI. I build my testbed with docker-topo and c(vEOS) image. This step will build a local topology with two containerised vEOS-lab devices:

The following step will build a docker-based kind cluster with a single control plane and a single worker node.

Check that the cluster is functional

The following step will build a base docker image and push it to dockerhub. It is assumed that the user has done docker login and has his username saved in DOCKERHUB_USER environment variable.

This is a 100MB image, so it may take a few minutes for test pod to transition from ContainerCreating to Running

This next command will perform the following steps:

If running as non-root, the user may be prompted for a sudo password.

In order to demonstrate how it works, I will do two things. First, I’ll issue a POST request from my localhost to the address registered on ingress (http://api.naas/configure) with payload requesting the provisioning of all devices.

A few seconds later, we can view the logs of the scheduler to confirm that it received the request:

We can also view the logs of the scheduled Nornir runner:

Finally, when logged into one of the devices, we should see the new configuration changes applied, including the new alias:

Another piece of configuration that has been added is a special event-handler that issues an API call to the scheduler every time its startup configuration is overwritten. This may potentially be used as an enforcement mechanism to prevent anyone from saving the changes done manually, but included here mainly to demonstrate the scheduler API:

Now that we have the mechanism to push the network changes based on models and templates, we can start building the user-facing part of the NaaS platform. In the next post, I’ll demonstrate the architecture and implementation of a watcher - a service that listens to custom resources and builds a device interface data model to be used by the scheduler.