In September 2019 I had the honour to present at Open Networking Summit in Antwerp. My talk was about meshnet CNI plugin, k8s-topo orchestrator and how to use them for large-scale network simulations in Kubernetes. During the same conference, I attended a talk about Network Service Mesh and its new kernel-based forwarding dataplane which had a lot of similarities with the work that I’ve done for meshnet. Having had a chat with the presenters, we’ve decided that it would be interesting to try and implement a meshnet-like functionality with NSM. In this post, I’ll try to document some of the findings and results of my research.

NSM is a CNCF project aimed at providing service mesh-like capabilities for L2/L3 traffic. In the context of Kubernetes, NSM’s role is to interconnect pods and setup the underlying forwarding, which involves creating new interfaces, allocating IPs and configuring pod’s routing table. The main use cases are cloud-native network functions (e.g. 5G), service function chaining and any containerised applications that may need to talk over non-standard protocols. Similar to traditional service meshes, the intended functionality is achieved by injecting sidecar containers that communicate with a distributed control plane of network service managers, deployed as a daemonset.

I’ll try to avoid repeating NSM’s theory here and instead refer my readers to the official documentation and a very good introductory slide deck. There are a few concepts, however, that are critical to the understanding of this blogpost, that I’ll mention here briefly:

Given all of the above, this is how you’d use NSM to create a point-to-point link between any two pods.

First, we need to decide which side of the link will be a client and which will be an endpoint. This is where we’ll abuse NSM’s concepts for the first time as it really doesn’t matter how this allocation takes place. For a normal network service, it’s fairly easy to identify and map client/server roles, however, for topology simulations they can be assigned arbitrarily as both sides of the link are virtually equivalent.

The next thing we need to do is statically add sidecar containers not only to the endpoint side of the link but to the client as well. This is another abuse of NSM’s intended mode of operation, where a client init container gets injected automatically by the webhook. The reason for that is that the init container will block until its network service request gets accepted, which may create a circular dependency if client/endpoint roles are assigned arbitrarily, as discussed above.

The resulting “endpoint” side of the link will have the following pod manifest. The NSE sidecar container will read the environment variables and use NSM’s SDK to register itself with a p2p network service with a device=device-2 label.

When a local control plane agent receives the above registration request, it will create a new k8s NetworkServiceEndpoint resource, effectively letting all the other agents know where to find this particular service endpoint (in this case it’s the k8s node called nsm-control-plane). Note that the below resource is managed by NSM’s control plane and should not be created by the user:

The next bit is the manifest of the network service itself. Its goal is to establish a relationship between multiple clients and endpoints of a service by matching their network service labels.

The final bit is the “client” side of the link which will have the following pod manifest. Note that the format of NS_NETWORKSERVICEMESH_IO variable is the same as the one used in annotations and can be read as “client requesting a p2p service with two labels (link=net-0 and peerif=eth21) and wants to connect to it over a local interface called eth12”.

The client’s sidecar will read the above environment variable and send a connection request to the local control plane agent which will perform the following sequence of steps:

Looking at the above manifests, it’s clear that writing them manually, even for smaller topologies, can be a serious burden. That’s why I’ve adapted the k8s-topo tool that I’ve written originally for meshnet-cni to produce and instantiate NSM-compliant manifest based on a single light-weight topology YAML file. The only thing that’s needed to make it work with NSM is to add a nsm: true to the top of the file, e.g.:

Behind the scenes, k8s-topo will create the required network service manifest and configure all pods with correct sidecars and variables. As an added bonus, it will still attempt to inject startup configs and expose ports as described here. 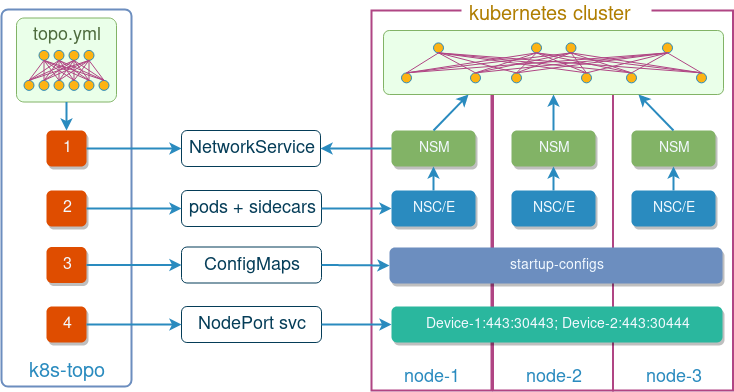 NSM vs Meshnet for network simulations

In the context of virtual network simulations, both NSM and meshnet-cni can perform similar functions, however, their implementation and modes of operation are rather different. Here are the main distinctions of a CNI plugin approach:

And here are some of the distinctions of an NSM-based approach:

In the end, none of the options limit the currently available featureset of k8s-topo and the choice can be done based on the characteristics of an individual environment, e.g. if it’s a managed k8s from GCP (GKE) or Azure (AKS) then most likely you’ll be running kubenet and won’t have an option to install any CNI plugin at all, in which case NSM can be the only available solution.

Now it’s demo time and I’ll show how to use k8s-topo together with NSM to build a 10-node virtual router topology. We start by spinning up a local kind kubernetes cluster and installing NSM on it:

Next, we install the k8s-topo deployment and connect to the pod running it:

The only thing needed to make it work with NSM is set the nsm flag to true:

Now everything’s ready for us to instantiate the topology inside k8s:

Once all the pods are up, we can issue a ping from one of the routers to every other router in the topology and confirm the connectivity between their loopback IPs:

If you want to have a look at your topology, it’s possible to make k8s-topo generate a D3 graph of all pods and their connections and view it in the browser: 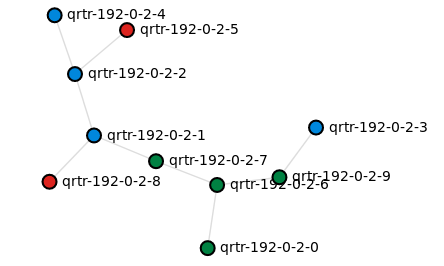